For a better experience on Squash Club, update your browser. 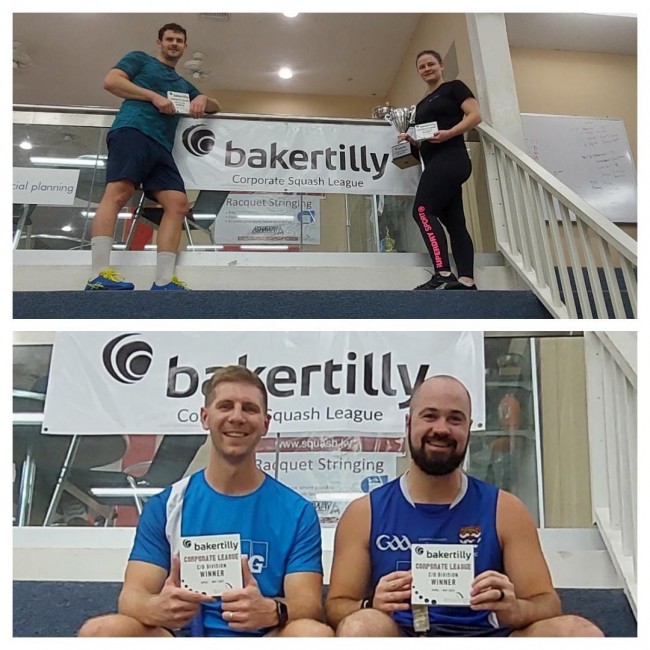 The A/B division final between Gateway Tech and Grant Thornton resulted in a battle of the siblings. Both teams won their respective group round robin play convincingly and set the stage for what would be an exciting final. The Brother/Sister duo, Michaela and Hugo Janse Van Rensburg of Gateway Tech topped their group with 23 points, whilst brother Sean & Daniel Murphy of Grant Thornton topped their group with 22 points.

The brother pair of Grant Thornton had previously won this division in season one of the League in 2021, however this was the debut season for Gateway Tech. Both teams had much to prove and they did not disappoint!

From the first game, it was evident that there would be a battle to the very end. The B string players took to the Court first with Daniel taking the Lead for Grant Thornton winning the match in straight sets against Michaela of Gateway Tech. This seemed to fuel the fire for big brother Hugo who quickly evened the score in straight sets. This meant the Doubles play would be the decider for the League Cup and both teams played accordingly. The Doubles play was the match of the evening with the crowd being treated to many long and thrilling rallies by the sibling pairs, however it was the tricky forward and back formation of Gateway that won over the usually side by side formation from the Grant Thornton brothers. Gateway Tech claimed the Bakertilly League Trophy in their first season of the League.

Not to be out done by the A/B group the C/D division had their own share of exciting matches with many games being decided by sudden death. The player to get 11 points first is the winner of the game, sudden death happens when both players have 10 points and the winner is determined by who wins the very next point. As with the A/B division the top team in each group made it to the finals for playoffs.

The C/D division proved to be very competitive as only 1 point separated the 1st and 2nd team in each of the groups in the C/D Division. KPMG 1 edged the DART Beastie Boys by 1 point to make it to the C/D Final, and new comers Digicel Group did the same with a 1-point lead over Alexandria.

The KPMG 1 duo showed up to take no prisoners and won convincingly in straight sets over Digicel Group in the C/D final.

We would like to thank our sponsor Bakertilly for their continued support of this event and squash on Island. We would also like to thank the supporting entities for entering:
Dart, PwC, Walkers Global, Digicel Business, KPMG, MUFG, Alexandria Ban Corp, Gateway Tech, Invenio Global, Grant Thornton and Bakertilly.
Special shout out to The Cake Studio (Cayman) for their delicious cupcakes

The Corporate Squash League is an opportunity for players to network and put their competitive play into action in a fun social environment.